Below is a list of digital forensics resources for linux. I especially enjoyed reading LUIS ROCHA‘s intro guide to Linux Forensics (#19). 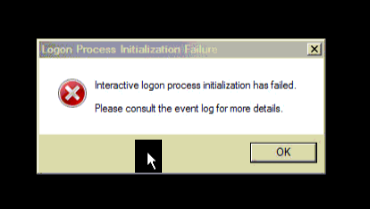 ESXi 5.5 – recently I tried to RDP into my Server 2008 R2 machine without success. Looking at the console, I get the message: ” Interactive logon process initialization has failed. Please consult the event log for more details. ” My first reboot of the machine did an automatic check disk. I can no longer log into the machine either via RDP or on the console. I’d like to not have to rebuild this system as it is my only stand-alone DC in my home lab. I’m going to bring up a separate DC, then do a DCPROMO, however, below are the steps I took to resolve the issue, albeit unsuccessfully – some of these steps may work for you. I was hoping I could mark this process as “Solved” but I haven’t gotten there yet…

These errors all seem to have started on 8/8/16 when the following events occurred:

Event 56 – The terminal Server security layer detected an error in the protocol stream and has disconnected the client. Client IP: 223.x.x.x which is a Hong Kong IP. Prior to that are many Event 1012 – Remote session from client name a exceeded the maximum allowed failed logon attempts. The session was forcibly terminated.

I pulled the machine off the internet and the network in case it’s been compromised. On second thought I should probably kill this machine with fire!

Things I have tried that did not resolve the problem:

Any suggestions? Has anyone gotten past this error? I can still connect to the machine via any means (mmc terminals such as event viewer, and task scheduler) other than a GUI console.

Edit: I gave up on trying to fix the issue – this is the reason we backup our VM’s and in this case I’m glad I had a good working backup. If you find a way to resolve, please drop a note – otherwise, make sure you have good backups of your DC’s: The VM as a bare metal backup and the System State (Separately.)

If you want to run a domain controller on your network but don’t have access to a Windows Server license, you can use SAMBA, the free open-source software, and VirtualBox, the free virtualization software. We’ll describe the procedure for setting up a virtual server using VirtualBox and netboot.xyz iPXE and move on to setting up your domain controller with SAMBA.

Set up Ubuntu as a domain controller with SAMBA on VirtualBox