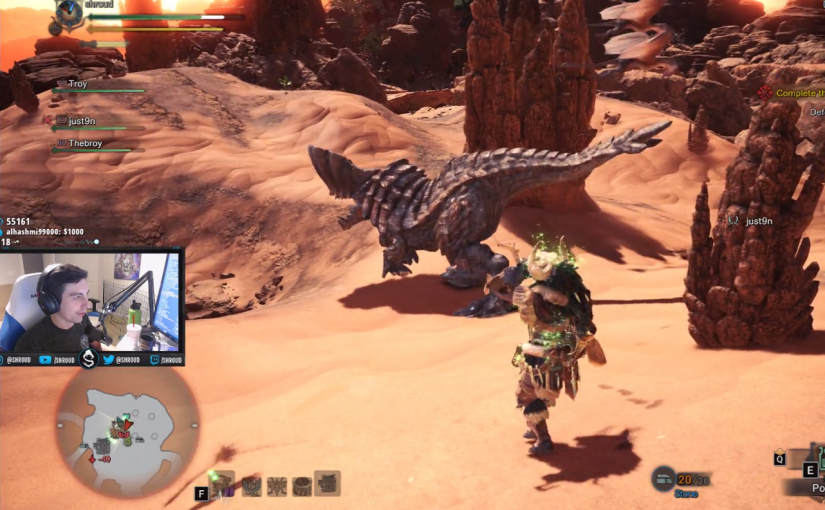 Started stream around 11:30am PST 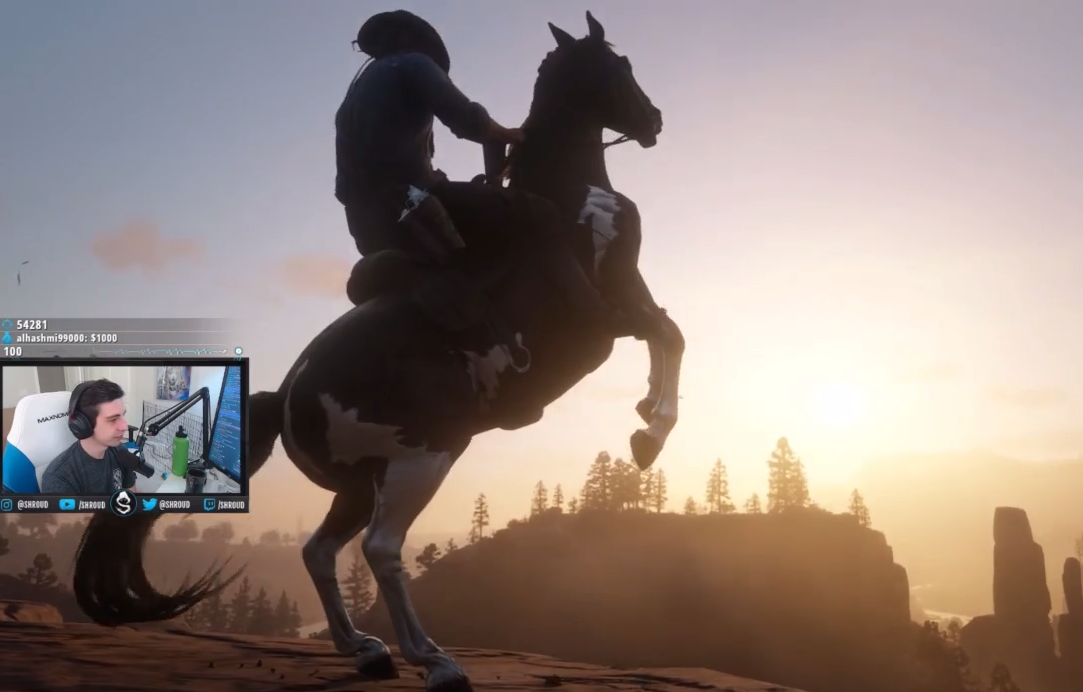 “This game is gonna bang. It’s going to f’n bang. But it’s not coming out on PC until later. I’m gonna play it on console but I’m gonna hate it. There’s no way they don’t release this title on PC. There’s no way.”

About his streaming PC – “I use the quad capture. You can start with aver media. Or you can use the Magewell USB capture 3.0 . Simple just a couple HDMI cables. Or one. You just plug it into your computer. HDMI > gaming PC > HDMI > streaming PC.”

“How did he see that? He’s getting so good at that game now.”

Are you still banned? Negative.

“OMG WTF Moster Hunter World number on steam. (237K) There’s no way there’s not that many people playing. It has to be Asia also. There’s no way. ”

“FYI, PUBG is banning stream snipers for stalking. Someone out there is taking them out. If you’re going to do it, be sneaky about. That’s it.”

I’m just looking out for stream snipers that also play.

“I love this game. This is insane wtf is going on? This is crazy there’s this many people. Let’s party.”

“I wish I could spectate and then go back to the death cam. Are you lunch box? Did you get banned? I have no control here. If you want to play the game, I’m warning you, you’ll be banned. You can’t blame me for getting banned I’ve done nothing wrong.”

“The new sub gifting package you can give individuals. Or pick a number and it will randomly pick people from chat, then mods, then followers.” Really cool system actually.”

“Troy’s poops are finally, finally starting to get solid. We have him on a diet that should not cause him diarrhea. We have to do tests to figure out what was causing it in the first place.”

“I’m obsessed with using the 2x. I think it’s because of the purple (reticule).”

“Are they banning wadu? They’re probably banning him. If he’s smart he probably wouldn’t do that right now. Everyone knows wadu, he doesn’t have to stream snipe. He can just do his thing.”

500 gift subs from EdgimusPrime, you are owning!

You guys are going to hear this alert like 500 times. I turned it down though (gift sub alert).

“I message him every day (alhashmi) he is part of the Dubai watch club. They put their last watch on hold for me to purchase. I’m not buying that. Not yet. 60k watch for 60k subs you got it.”

“Ok edgimusprime donated another $100. That’s a lot of money, shit. I literally own 2 pair of shoes, and one of them is destroyed. I wanna own more shoes because I destroy them quickly. The thing is, Chad is my shoe guy. I go to him when I need shoes. We haven’t done that in a while. I don’t care much for shoes. I’ve never owned more than 3 pairs of shoes. But I’d like to have more variety. I have Louis V’s hightops. My first high tops. I’m always wearing shorts unless it’s a special occasion.”

“Part of me thinks Chad doesn’t enjoy streaming all that much. That he would be happier doing other things in the gaming community. Because he has options if he wants. I’m pretty sure Chad wants to move to Vegas.”

“Those 2 maps kinda got ruined for me. Even this maps gets a little slow can you imagine the other maps?”

“Are you going to play the new insurgency? The beta comes out today. I don’t know. I want to play monster hunter. I’m not sure if it’s my style. I do, I don’t I don’t know.”

Justin downloaded Monster Hunter. I think we’re both going to be newbies.

Shroud gifting 50 subs to his plebs

Are you capping FPS? No. It’s uncapped.

Yeah Jess isn’t here until Saturday night. I’m not going to ruin my schedule but I’ll probably end up streaming more than I normally do. Like tonight I’ll probably stream late as f. I still want to be in bed at midnight maybe end my stream at 11. He’s gotta be on our schedule too. He knows midnight. He can tell time.

“Stewie I’m inviting you now. I’m going to have a little house warming party if you’re interested. Bring your swimsuit.”

J9 joined the chat. J9: “You know when Doc talks about hot acidic diarrhea? I’m taking it to the next volcano level. I’m waiting to go live because I might have to rush to the bathroom any second. Yep yep yep yep yep yep!” S: “Hahah I can imagine him sprinting to the bathroom. He ate taco bell. Think about it, it’s a good thing. Fast food, fast shits. You should have some pepto.” J9: “YOU SHOULD NEVER TELL ME HOW TO LIVE MY LIFE MICHAEL!”

S: How many emotes do you have now? J9: Oh, 39. I think 5k is the cap. I still have 5 extra. I think you should delete your main channel and see how well you do on your 2nd channel.” S: “I would probably crash and burn” J9: “I think I have swamp ass. I feel ill. Did you know there’s somethign called manpons? They’re like tampons but for you butthole.” S:”That’s actually what they’re called? How do you know this? You’re not leaking, you’re hurting you need a cream or something.” J9: “Will you put that on for me?” S: “Yeah sure cause one day you’ll have to do it for me.” 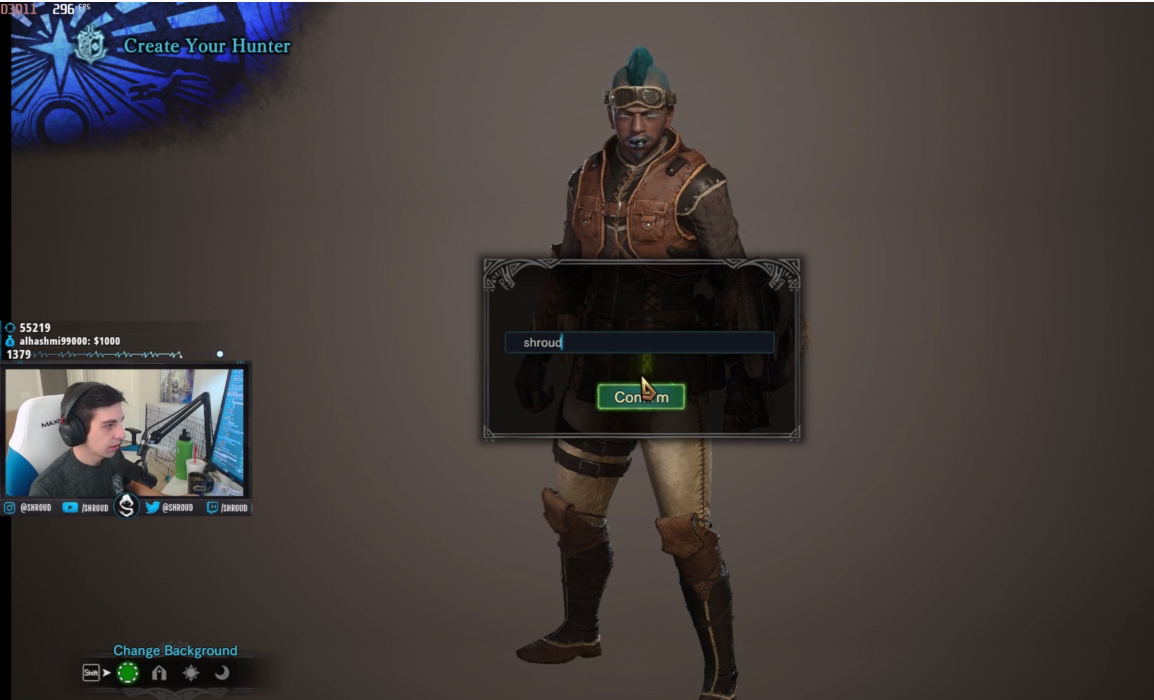 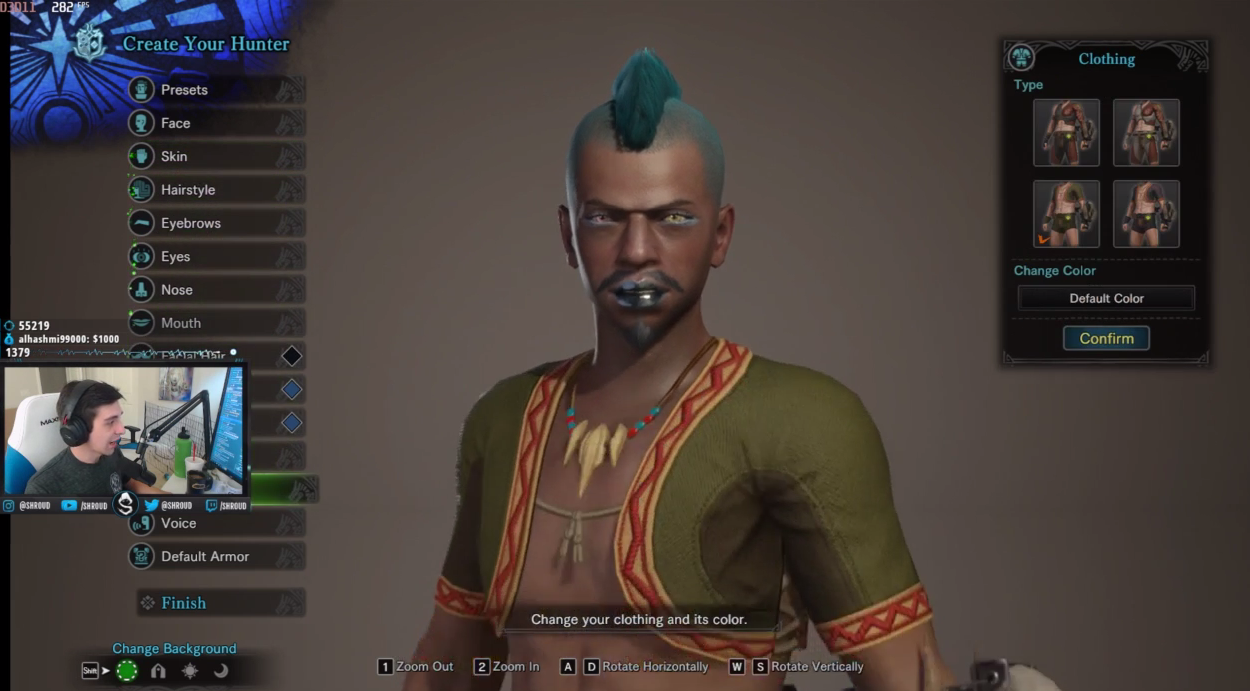 Yeah this is pretty troll. (Goes through training tutorials solo)

J9: Are we playing together? S: How do I do that? Gathering hub? 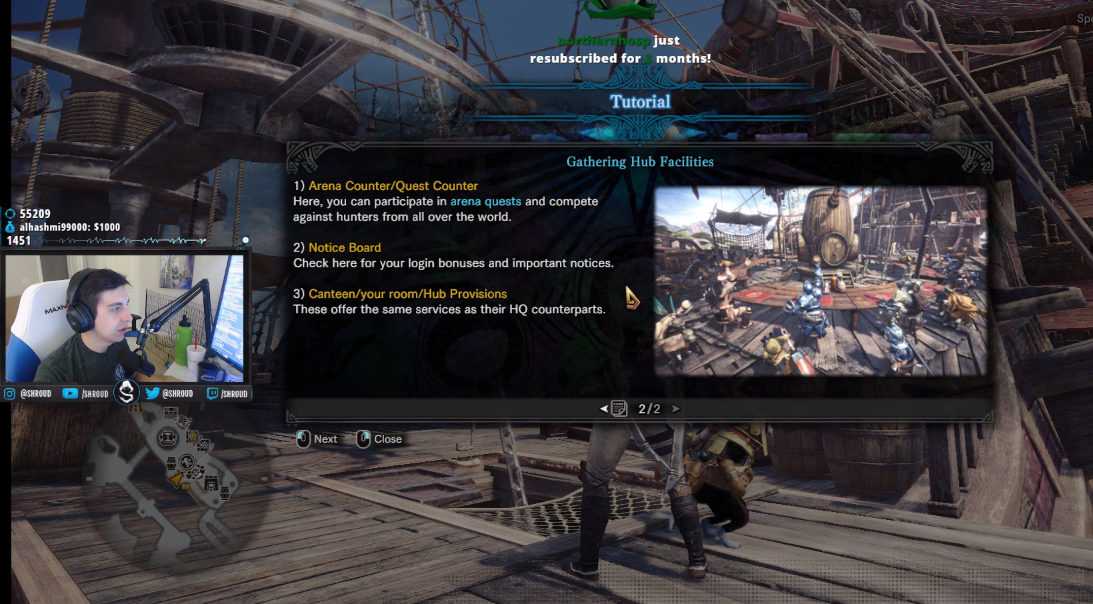 “Why is this so confusing?” J9: “Because it’s a port from console.”

S: Yeah I guess you gotta do it solo or something. This is very difficult. These controls are interesting. I don’t even know what “R” does.

S: “It is so yellow outside it is crazy.”

S: (In training grounds) Oh! This is way better than a bow! J9: Yeah I’m owning. What are you using? S: Sword and shield. (confusion) I’m just trying to play some co-op.

S: I can make some bone armor? I don’t know what I’m making, I’m buying it. Sounded cool so I bought it. Look at me, I look sweet! I wanna eat. 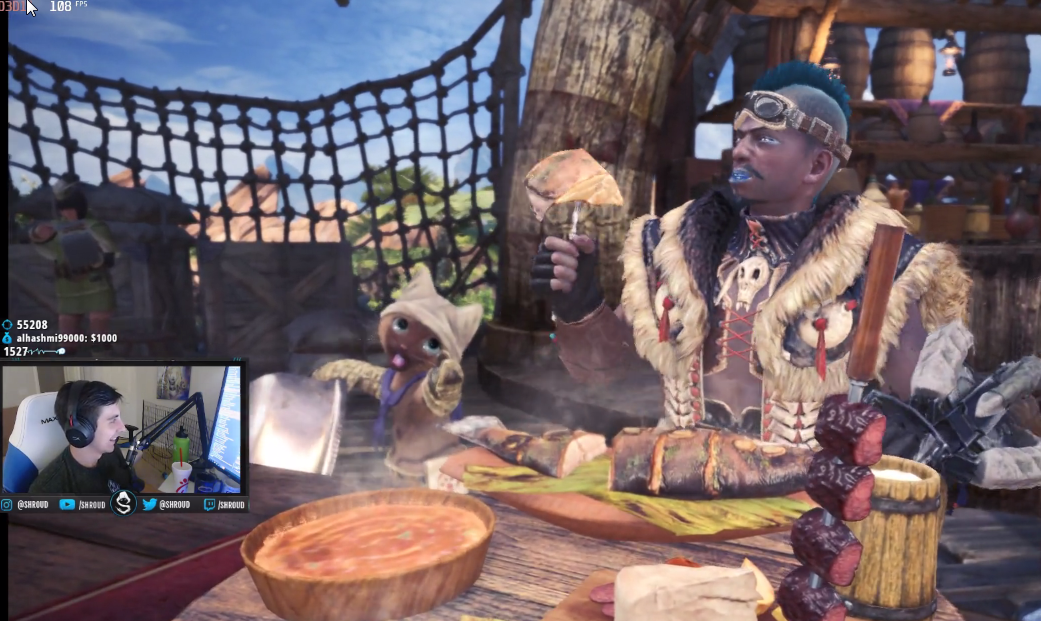 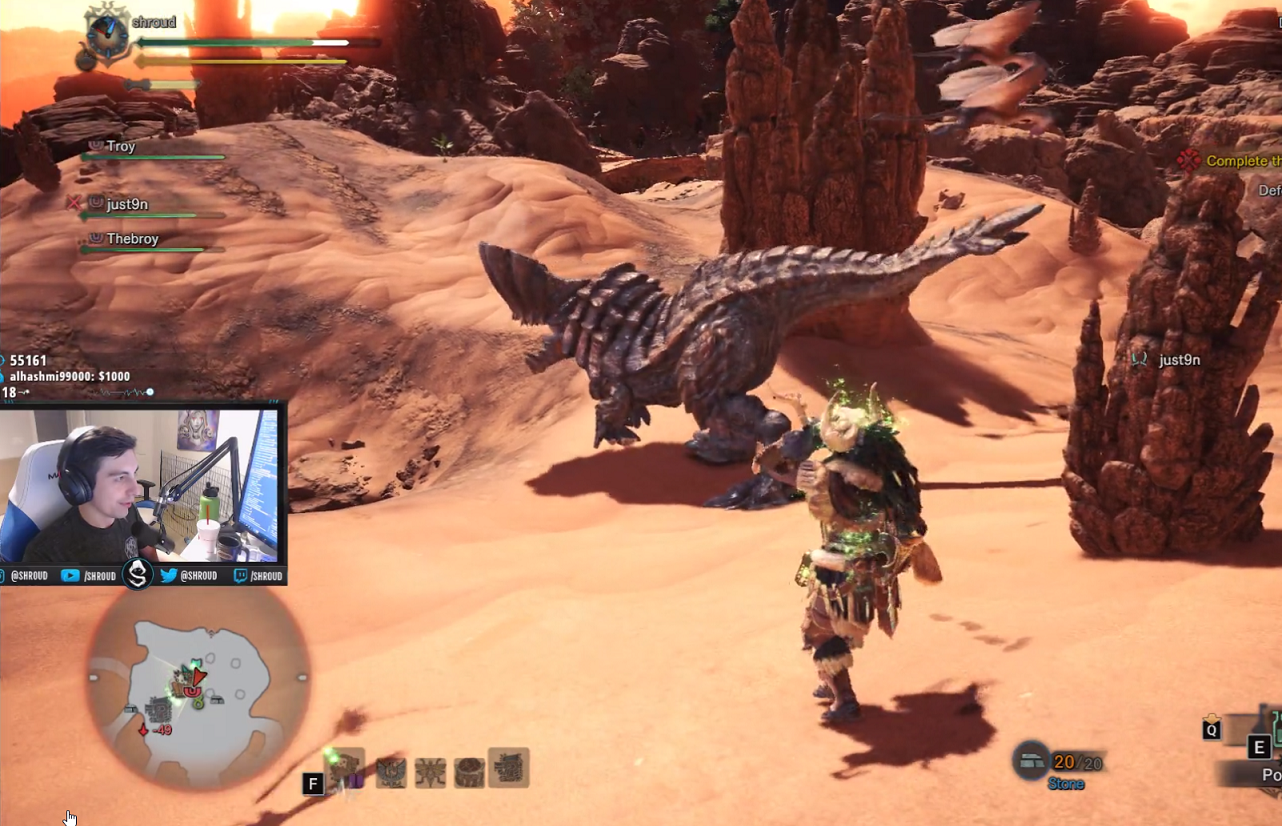 “Goddammit! I wanna mount it!. I don’t like the music in this game.”

Ok done with Monster Hunter around 7:30pm and jumped into Rainbow 6 Siege 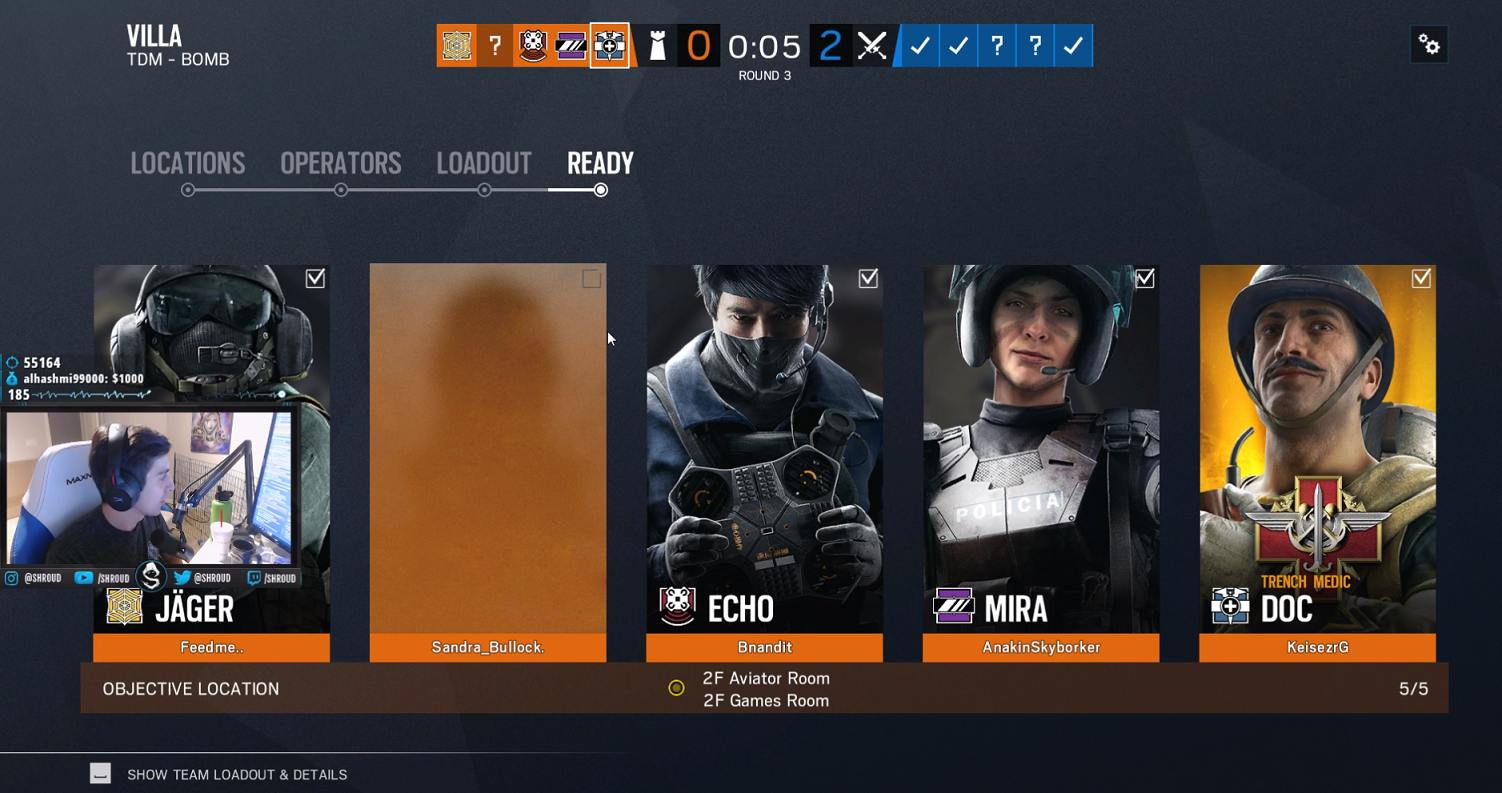 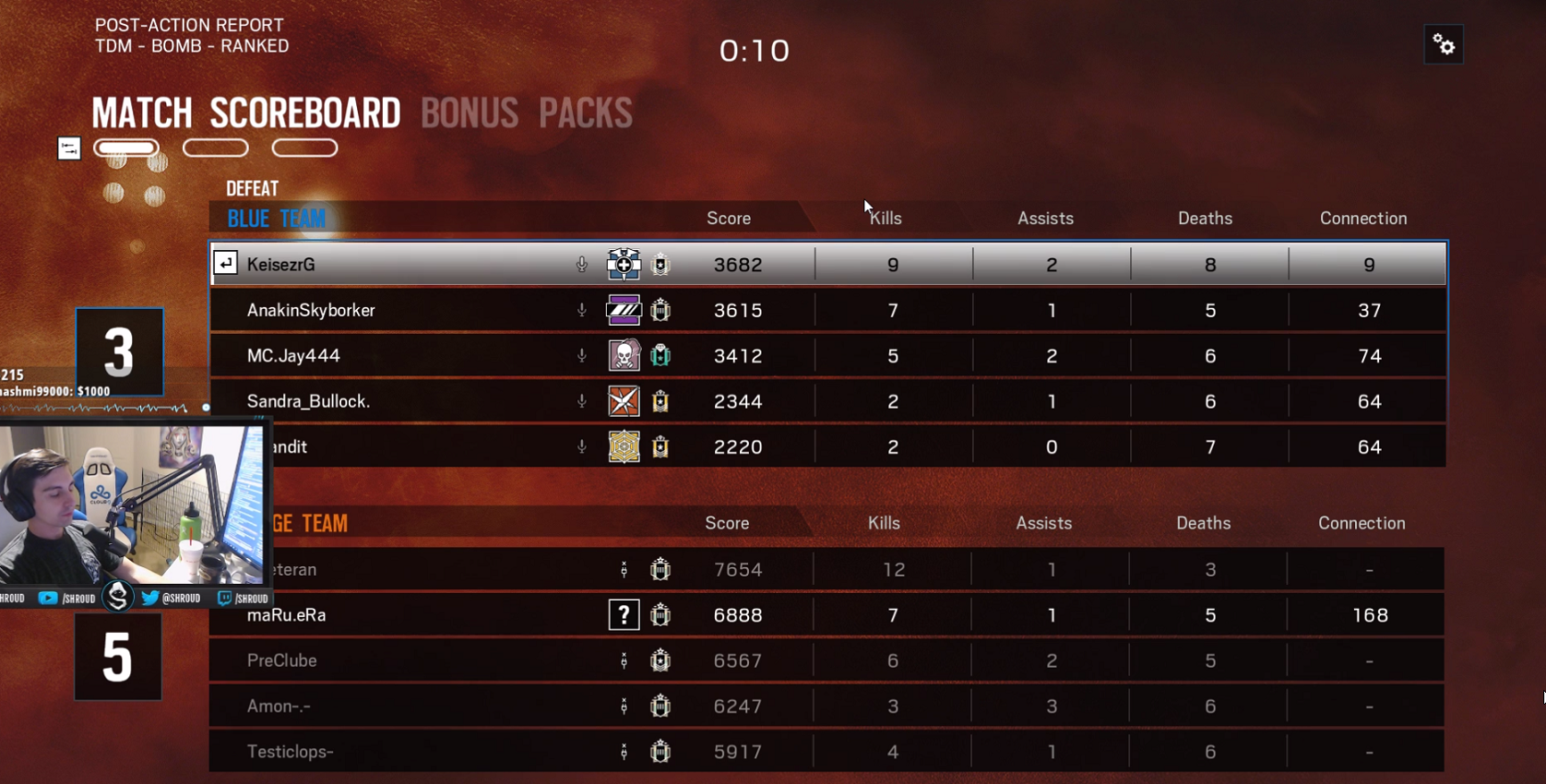 You can spam this wall?? I’m dead.

Dono $500 – AlHashmi had a hookup on a watch. Specifically held a watch for me. It is kind of an investment. It’s weird to think about because it’s a physical item.

More R6 will be back on tomorrow around noon. GG’s everybody. Farewell.