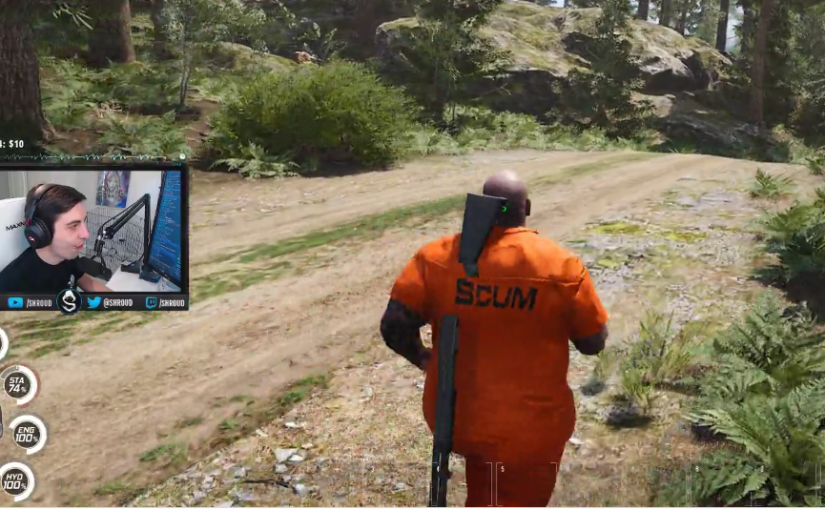 Ok my guy (character) is a little thick. He may be a little slow but he can punch!

(Connection lost 2 x ) Maybe I should play single player because I can’t stay connected in multiplayer.

Is there wild life? Is there A.I? Hey I got 1 fame point. Hey there’s a map! I didn’t expect there to be a map honestly.

I swear if it DC’s one more time bro. He’s going to become slim again with all that jogging. hehe.

Well we got a shotgun but no ammo for it. At least you regain your stamina pretty quick. 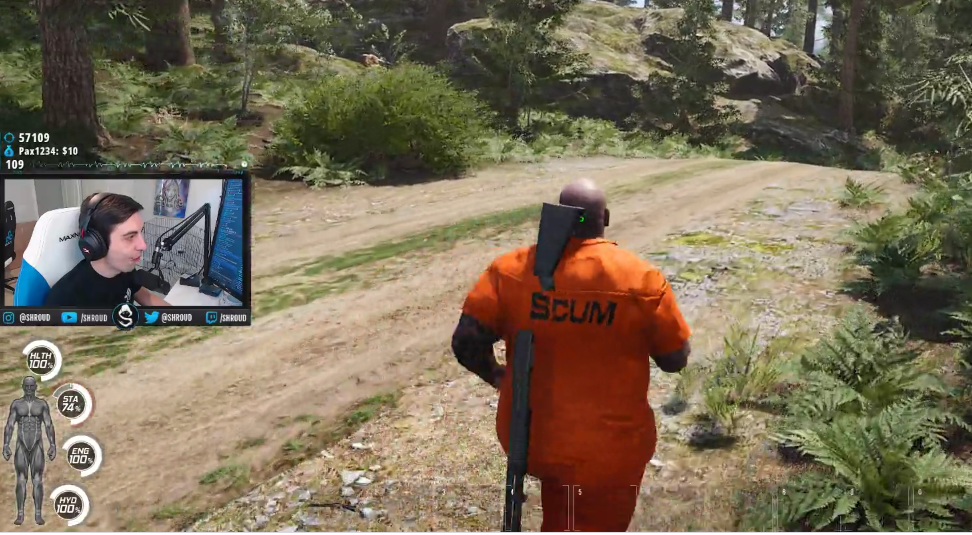 Game looks pretty good, like OK-ish looks alright, nothing special. They focused on character models. I probably should have built my model to be fit. Maybe it will help me.

I can’t hold shit. F’n Crocks. No one wears crocks. It’s 2018! Energy? I don’t have anything to eat. I’m probably going to die. Do I die instantly? A candle. Can I eat a candle? An egg (eats) haha nothing like some raw eggs. Please give me something real to eat. What’s that? (finds cabbage and eats it.) My eating speed maxed out. What did that do for me? Anything? Not really. I feel like cabbage isn’t going to help me. Parsley. I don’t want to eat it all. Can I cancel? I think I made my character too fat. 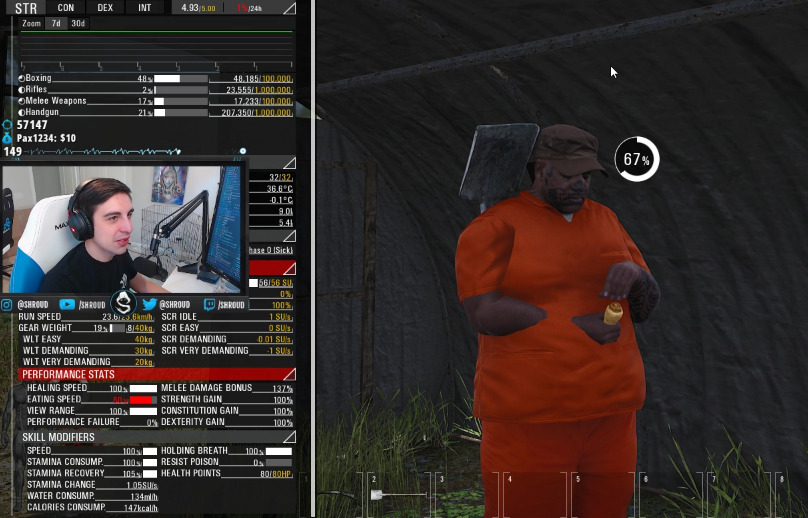 I’m going to go there after I eat a few more cucumbers.

I’m hungry, I know not much we can do about it. I need many things. I feel like the loot is bad or I’m unlucky. This dude is an absolute unit. Thanks man. I’m going to be alive for not even a day.

Look at this place, there’s bound to be food in here!

The game Disconnected – Goddamnit! I’m all the way back here!

This is not BR, this is more like DayZ. Think of this as uh..

We’re going to this compound and get spaghetti-o’s a shotgun, a backpack. What the? There’s a f’n robot in there! Let’s go fat man! How is there nothing in the fridge? MP5 mag. A bag! Haha we’re going to make it. I have really high stealth for a fat man. I’m stealthy. Would you like to try this game Jeremy? I have a code for you. Well we got a gun now. A work jacket! It’s happening! It’s DayZ.

(Gets shot by robot sentry & dies)

Oh god I thought I’d have a new character. How do I get  re-do? They throw zombies at you too. Oh god I’m at the bottom of the map. You have to leave to delete your character? It’s really weird how you run. You use mouse wheel up.

How do I take a shit chat? There’s events? Team death-match. Entry fee 10 fame points. Fame points is like your currency. Don’t mess with the robots. I shouldn’t have ever died. But I did it for the content.

Yes! My little pony backpack. Looks so stupid ha ha. I think a lot of the animations don’t even exist and have place-holders. Oh shit you can vault!

(Disconnected again) We lost our pink jacket. Well I’m sad. I wonder if the loot is the same in the same spot. God I’m so lost. It’s kind of tedious looking through everything.

This game is kind of cool. There’s a lot of people on this server. I feel like I have to know what server I’m in. Is there a way of checking?

Ha ha look at my character. 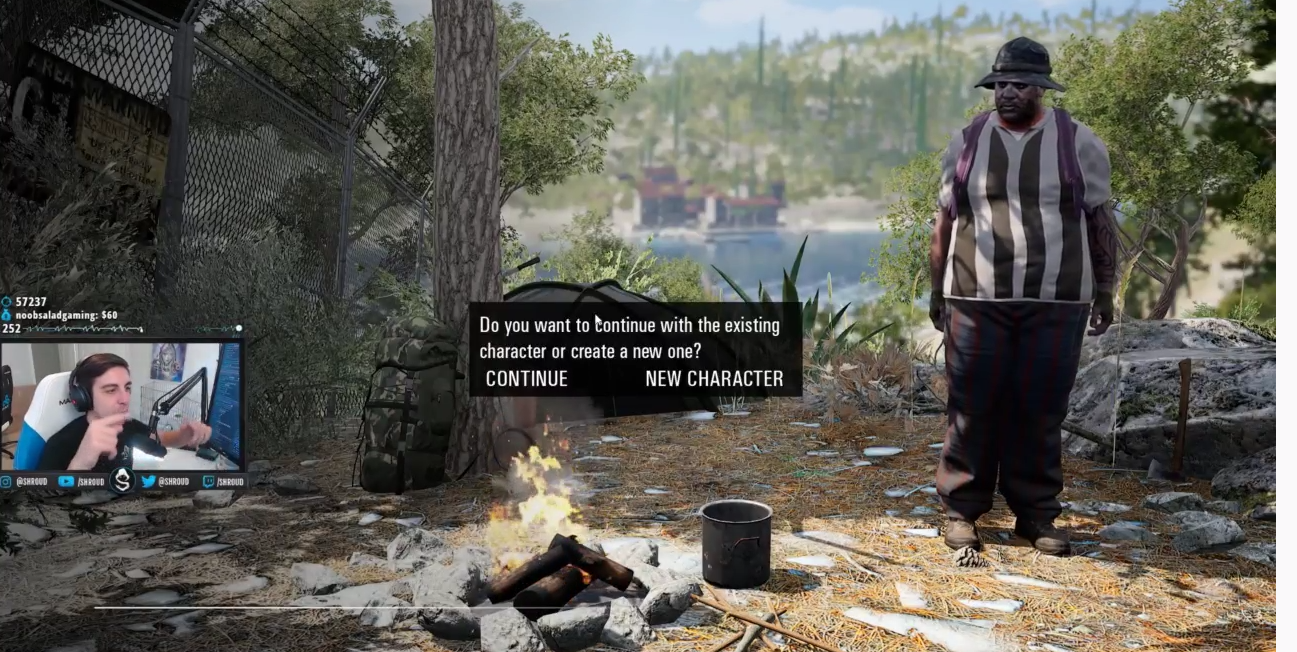 I feel like there’s going to be a meta in this game. This is where I spawned last time. I found rifles more than pistols. Damn I spawned so far up. This match is huge! I wonder if there are vehicles in the build?

I feel like when this game comes out in the future there won’t be a map. Is there an auto-run? I would hope so. I’m excited for 1st person only servers.

Zombie’s come at night. Military base is down by B3.

I found some cereal! Oh there’s a guy here! I can’t stop! I’m going to die! Hello? Do you have a can opener? Once the robot spots you it will one-shot you.

Zombie! Ah shit! (Climbs up ladder) You’ll never get me up here!

I’ll be right back.

This game is so strange, it’s like DayZ. It really wants people to fight. There are events.

Holey Shit this backpack is huge! Damn I don’t have ammo anymore. My character is actually doing really well!

Yes. Alright we got our ammo back. I’m pretty sure your weapon quick access is bugged.

I like the movement in this game. This is pretty much DayZ 2.0. But it looks like it has more arcade-y type stuff.

Oh there’s an airfield in B1. You can use fame to buy stuff back if you die.

There you are (anyTHING)! Damn it’s laggy.

Yeah game’s cool. It’s going to be hard to shoot people with lag like this. We should try to find an animal and kill it with your .22.

I found more 9 mm ammo. Apparently the company tweeted about 30 minutes ago and are working on it (the disconnects). Bro I have 30 shells. If you want a shotgun, man. I think you left it in the police station. Food struggle, man that’s all this game is. It’s always something.

Get me outta here!

(They meet up with 2 other random people) Is that shroud!? If you search the zombie, all his stuff pops out onto the ground.

I think there is a memory leak. After a Disconnect my frames are ok at 130 then get progressively worse.

(looting a mil base) There’s a drone! I’m trying to single shot the drone! (Jeremy dies) I’m dead Mike. The robot peeks me through a crack. I trying to find your body. I want your backpack but it will take forever to loot.

I don’t have any Kar ammo. How many times do I have to tell you this? I have no food. My frames have been slowly fading away (down to 45).

I feel like you can get geared up pretty quickly unlike DayZ.

Yeah the loot there is crazy, I’m trying to make my way to the airfield. My food is really good. That MRE is still in my system, just chillin.

You can make wild fires. You can burn some shit down!

That’s how you get fame, the more crafting you do. The way the map is designed is really cool for sniping. Shelter is a squad spawn point.

The game is interesting for sure. They have a realistic nutrition monitor, but they have so many arcade elements. I don’t know what they’re going for. Now it looks like they want a more arcade-style DayZ.

You can respawn on a Squad, or respawn on person. I just want to go out with a bang and stop playing. It’s cool though, I like it.

I’m coming for that ass! (clip)

Did you meet my friend? (clip)

I can spawn right outside of here for 75 fame points.

I’m logging out and logging in to fix my FPS. (leaves game at 45 FPS, rejoins at 95FPS)

Zero kills? What do you mean? I’ve gotten so many kills it’s bugged.

Woah, this is dope! I got a flashlight on my head. This is cool! 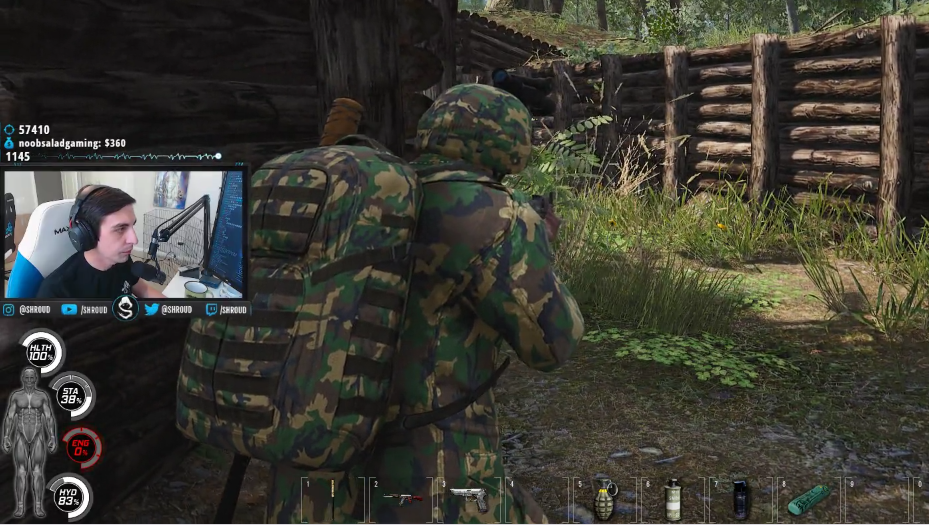 This has nothing to do with survival. Bro, I got a drone on me! You earn fame points if you win. We traded (simultaneous deaths)! You can trade in this game. This is like the worst gun play I’ve ever seen. Dude it is bad. I just head shot that guy.

This is a cool idea though. People are just teleporting.

You don’t even have to play scum you can just Team Death Match. My fame doubled.

This is so f’n wrong dude.

I don’t think I can play another hour of this. The fame points are cool. I played that game for 7 hours. I probably won’t play again until the update happens. Server performance is probably one of the worst. It probably won’t play well until 3 years from now. It’s a good meme game. $20 is not bad that’s ok.

This is my first game, will give it whirl. God the mouse movement feels so weird in this game. 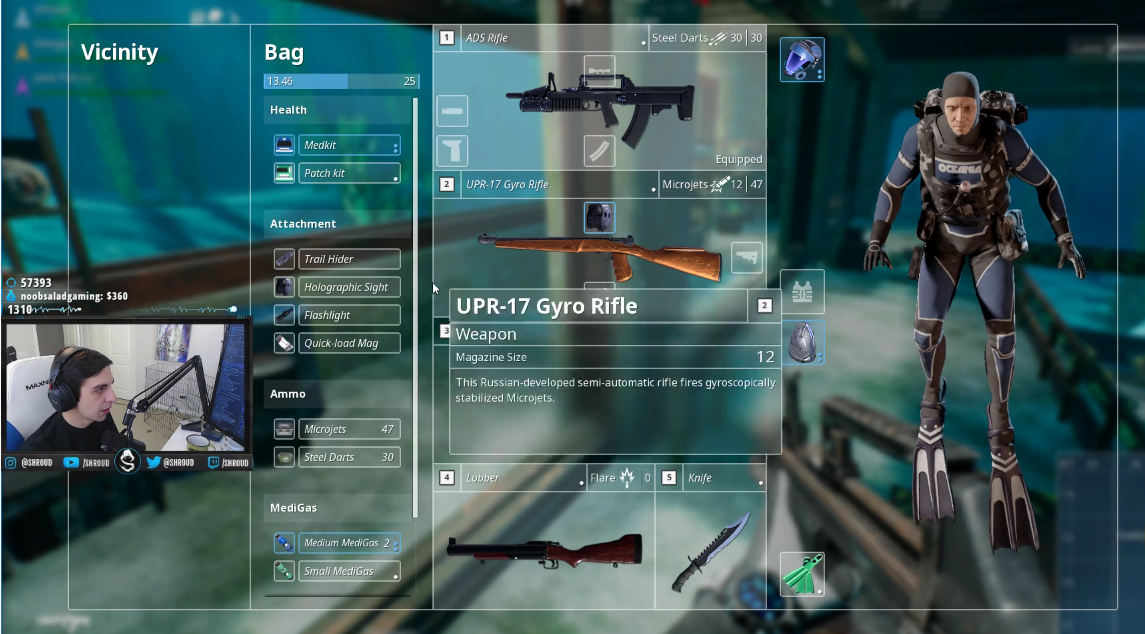 This BR is crazy because you can’t see far. This is so weird. He’s got a sniper? How do I make it burst? Oh (B). First it was sniper, then shotgun, then sniper again.

There’s a boat! Gimme loot gimme gimme gimme loot. I guess when you hit them it reveals them? I thought that’s what the flare was for. I have a tracker barrel? Ohhh. Ohhhhhhhh. That’s what that does.

Interesting game. I feel like they need a way to speed up movement? Maybe fly? 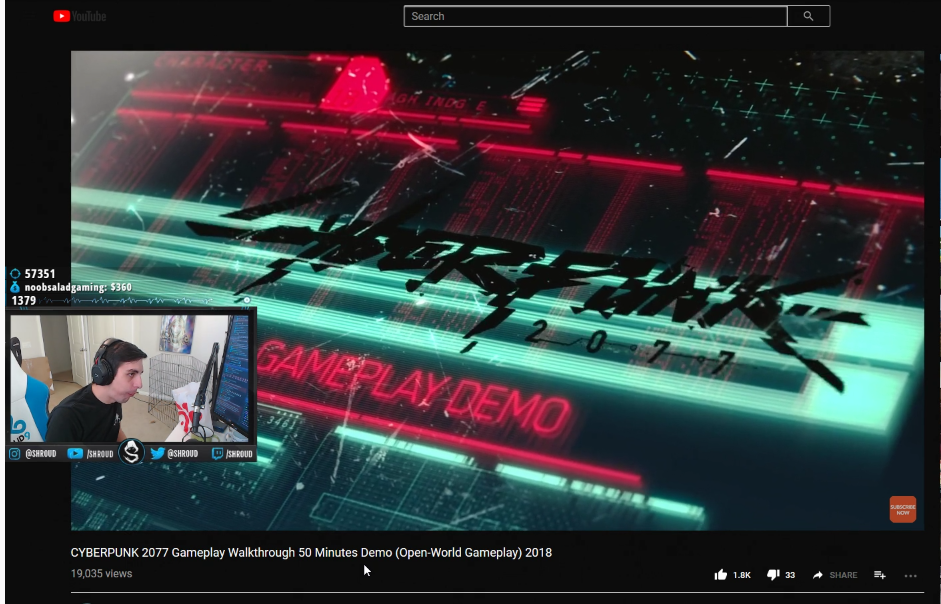 This looks like Borderlands. This game is definitely going to be streamed on twitch. Sex scenes, boobs and titties. Nobody looks around like that but this is kinda cool.

This game is going to probably be pretty sick. Yeah there’s nudity in a lot of games. It’s fine in stream so why not a trailer? I hate the slow pan. It makes me cringe when I see a slow pan I f’n hate it.